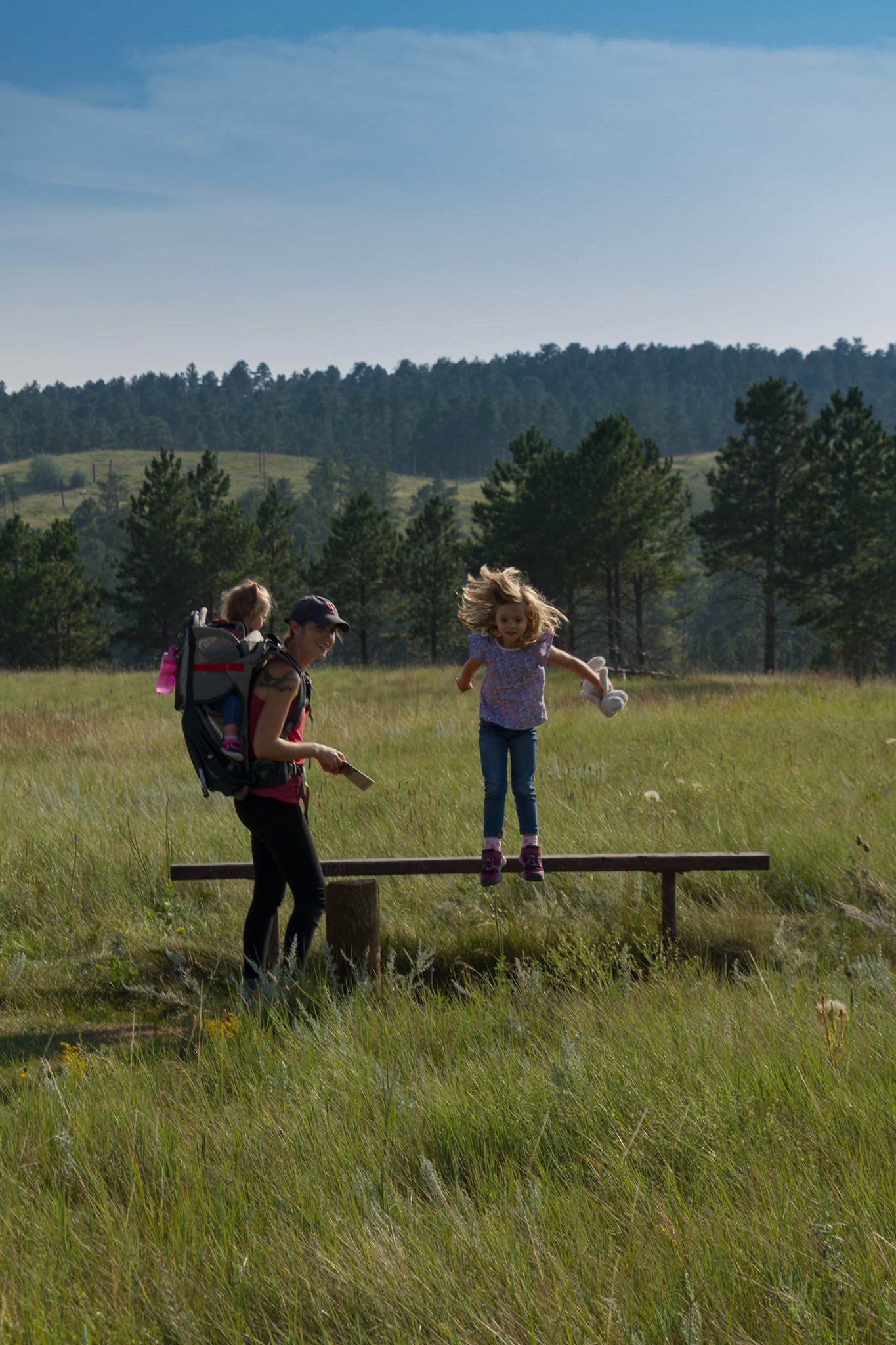 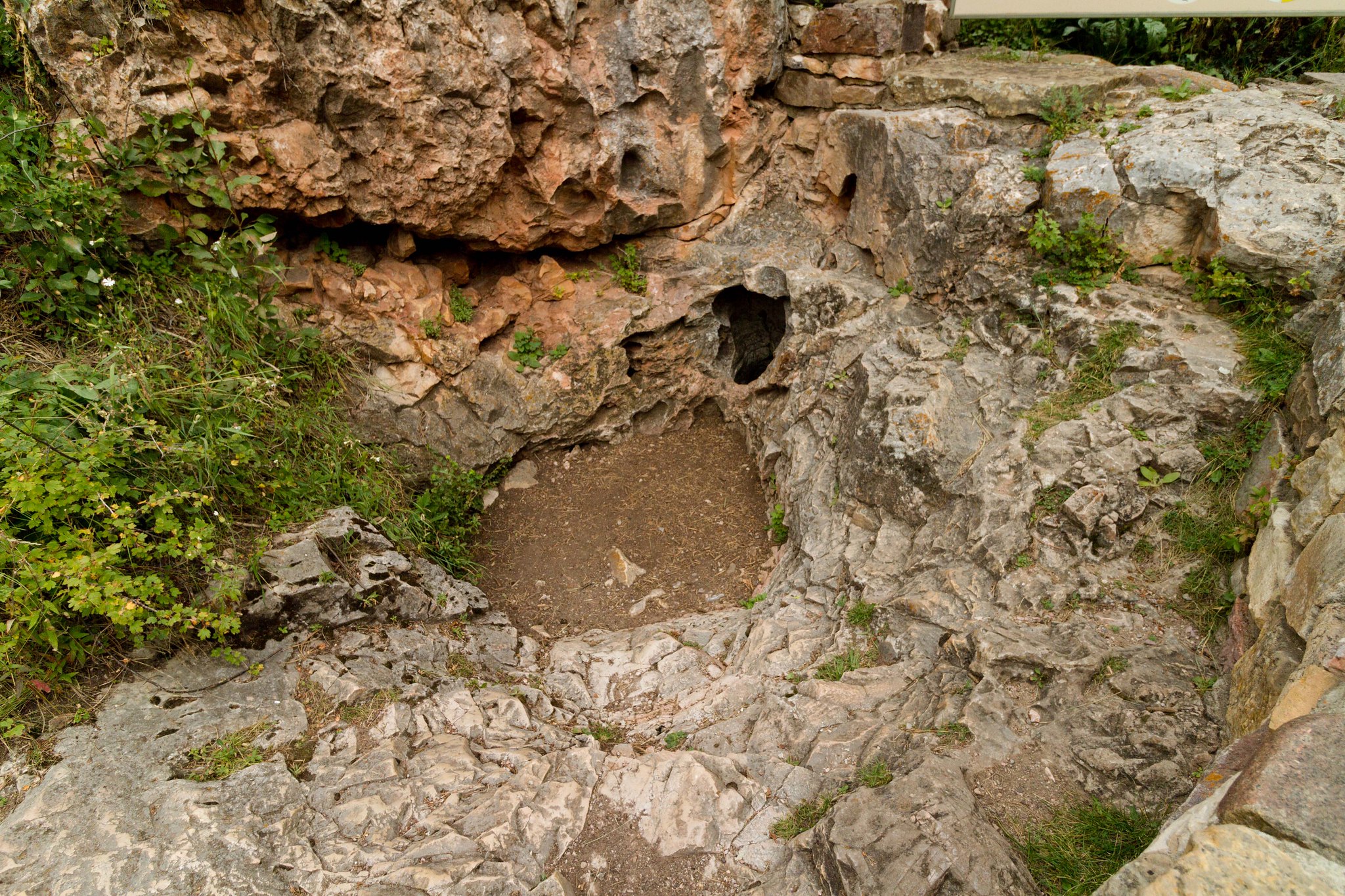 The Natural Entrance Tour starts outside near the literal natural entrance to the cave. It’s the only natural entrance and it’s about 10” x 18” — seriously small! This is where the tour became quite fascinating.

Brothers Jesse and Tom Bingham found the natural entrance to the cave in 1881. They were led to the entrance when they heard a “whistling” sound, which was wind coming from the entrance due to barometric pressure differences. That’s why it’s called Wind Cave. They’ve clocked winds coming from the opening at 45mph. Sometimes, the wind blows into the cave. Of course, the brothers were not the first to discover this cave. The cave entrance had long been known to the Lakota and it figured into their creation myths, but they are not thought to have explored the cave.

It wasn’t until 1889 that true exploration of the cave began. The South Dakota Mining Company hired the McDonald family to explore the cave in hopes of finding gold and other valuable minerals. Alvin McDonald was only 16 when he started exploring the cave for the family business. He fell in love with the cave and kept a cave diary that has helped park rangers immensely about the early history of the cave. No valuable minerals were ever found, but the family did begin offering tours in 1892. Tragically, Alvin died a few years later after getting Typhoid Fever at the World’s Columbian Exposition in Chicago in 1893.

Eventually, the McDonald family and the Stabler family quarreled about homestead rights to the cave and its opening. Long story short, they both lost their legal battle when the courts decided that the area should be set aside for public use. The cave was surveyed by the government in 1902 and President Theodore Roosevelt signed legislation to create Wind Cave National Park in 1903.

The natural entrance tour really starts when you descend dozens of steps adjacent to the natural entrance; the tour entrance is housed in a small building. Immediately, you realize you’re going DOWN. WAY DOWN. At the end of the tour, we were 200 feet below the surface. You get back up in an elevator. 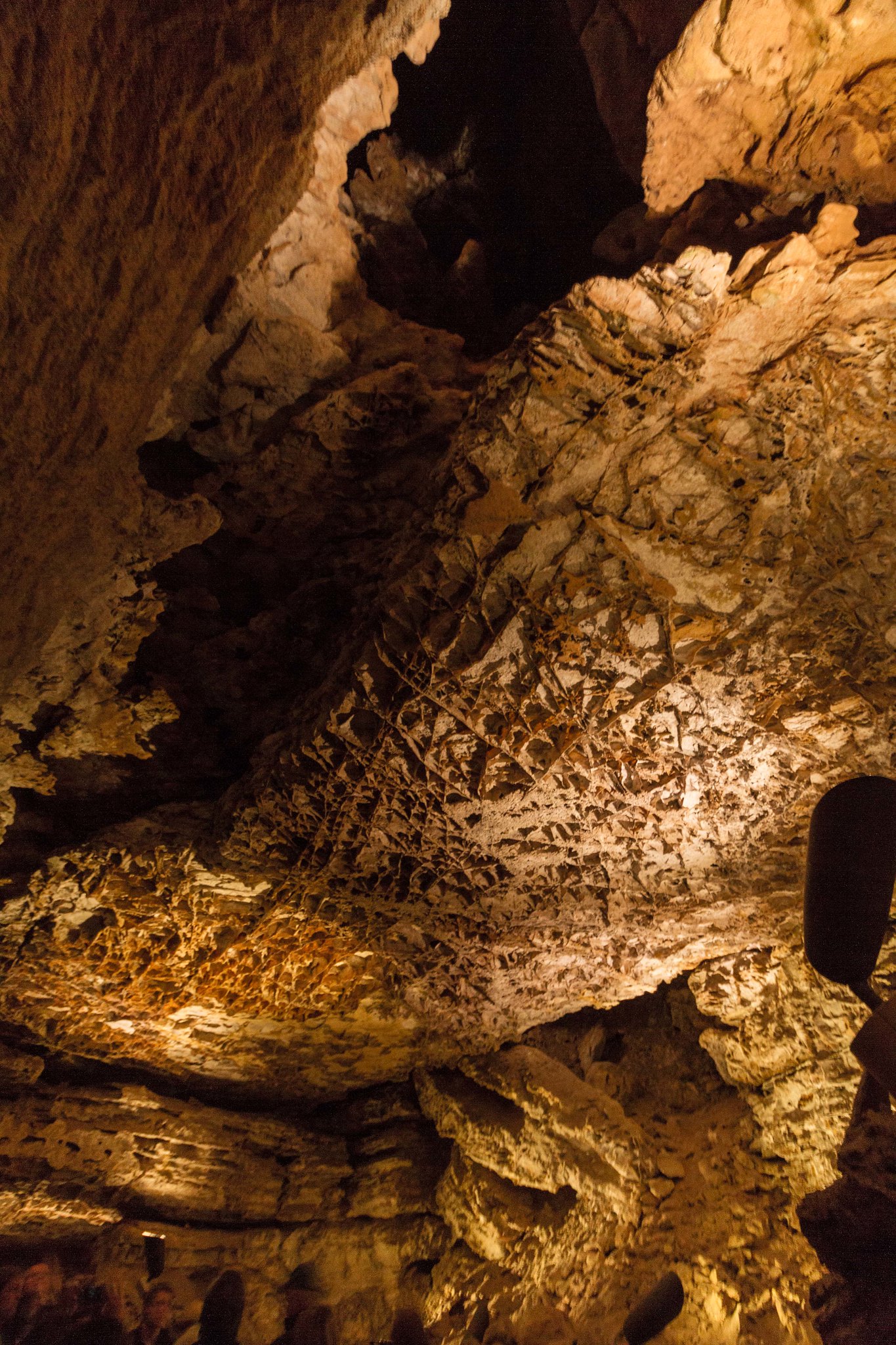 Along the tour, you will notice the main feature of the cave, which is called boxwork. It’s a formation that the McDonalds named because they thought it resembled post office boxes. There’s some fancy geology words that describe what it actually is, but I’m not a geologist. It is, however, a fascinating geologic formation and over 95% of the world’s boxwork is found in Wind Cave. The cave is truly a wonder. The whole time you feel a sense of awe that you’re following this underground maze that goes on for over one-hundred miles. Yet, it’s so unassuming from above ground because you’d never even know it was there if it weren’t for the small natural entrance. And you certainly wouldn’t have guessed it extended for over one-hundred miles from that small opening alone. Scientists have estimated that only 10% of the cave has been explored or discovered at this time. 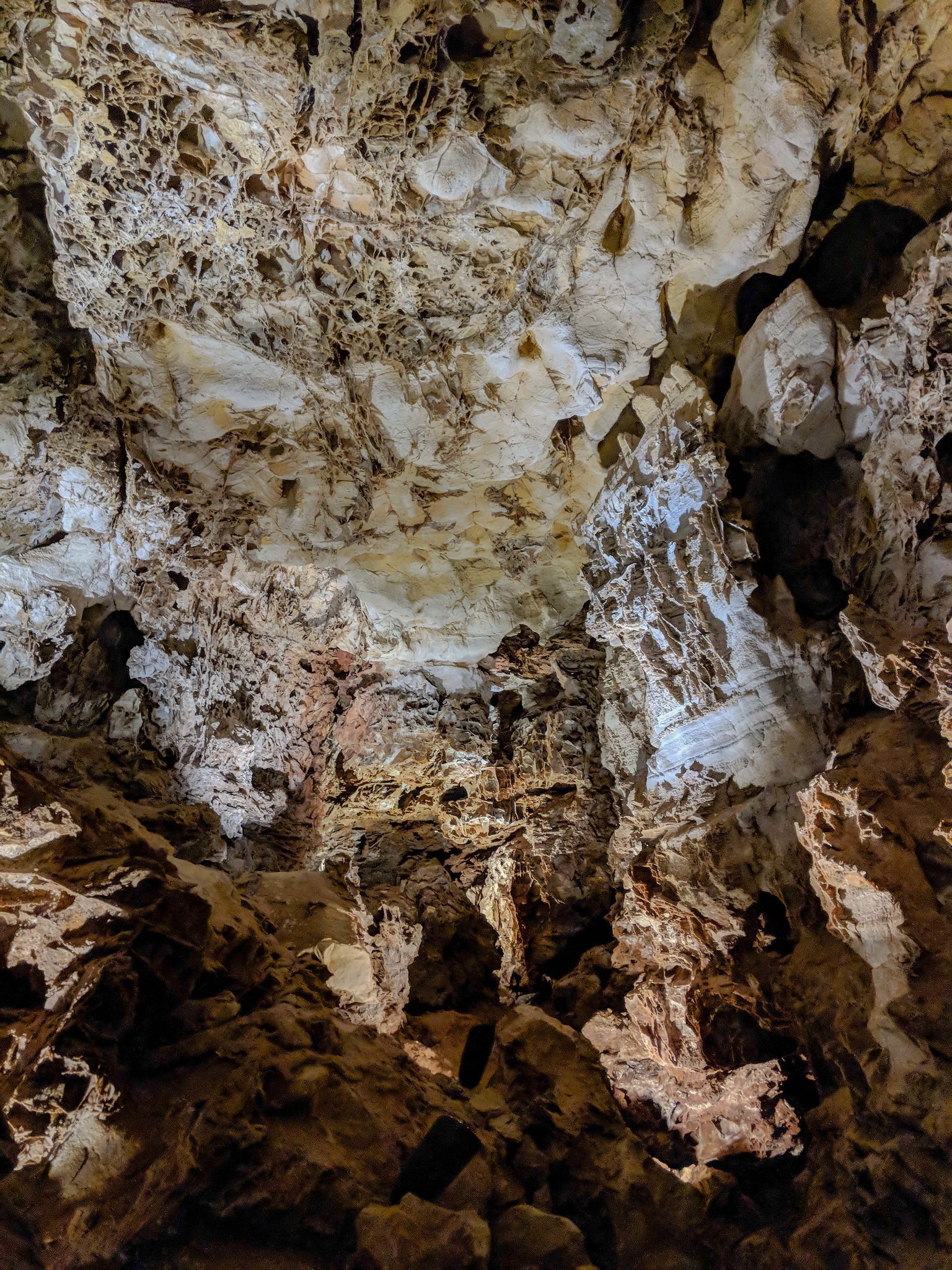 I assume a large majority of the public takes a cave tour and drives back out of the park without a second thought. But the rest of the park is why I call this park a hidden gem. The entire park encompasses 60 square miles of varying landscape, primarily mixed grass prairie. And the scenery is gorgeous.

The drive through the park to the visitor center was full of wildlife. Around every corner was a bison it seemed. The rolling hills were picturesque. We wanted to get a hike in since the park has several trails. On the first day, we emerged from the cave and it was raining so we had to go home until afternoon when it stopped raining. It’s crazy that we had no idea what the weather was like on surface when you’re 200 feet deep in a cave. When it finally stopped raining, the kids were pretty beat so we only had a little hike in mind. We did the Elk Mountain Nature Trail which is a one-mile loop around the Elk Mountain campground. It wasn’t anything spectacular, but if you’re looking for a short hike in the park, this is one of a handful. 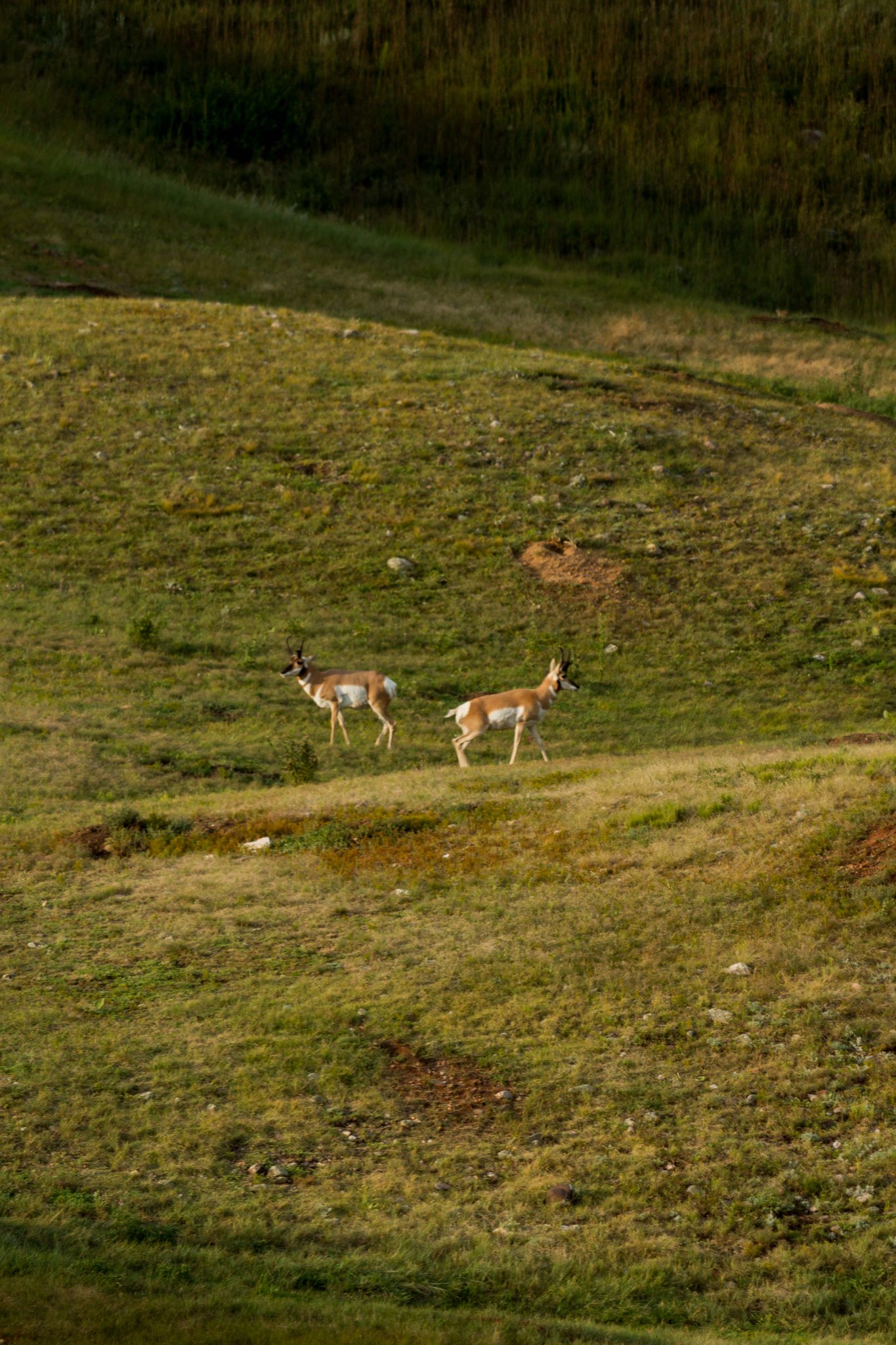 We camped in Angostura Recreation Area which is just south of Hot Springs, SD. I definitely recommend this campground: it was very well maintained, had plenty to do in the recreation area and the facilities were luxurious compared to some campgrounds we’ve stayed before.

What’s interesting is when you visit Mount Rushmore and Custer State Park and the Black Hills in general driving up from the south, you end up driving through Wind Cave a lot just to get from Point A to B. This was actually a blessing in disguise. We got to see pronghorn one evening when we were passing through after visiting Mount Rushmore. One day, we were heading back from seeing Custer State Park and decided to stop off and take one last trail. Again, with kids we did a short, one-mile trail called Rankin Ridge. This was actually quite an amazing trail and just the right length with little kids. I recommend taking the clockwise route. Some of the views of the park were outstanding. It wasn’t too strenuous, but offered just enough features to make it a fun hike. There are several other longer trails throughout the park and if we had longer time in the park or had older kids we’d definitely want to try them all. 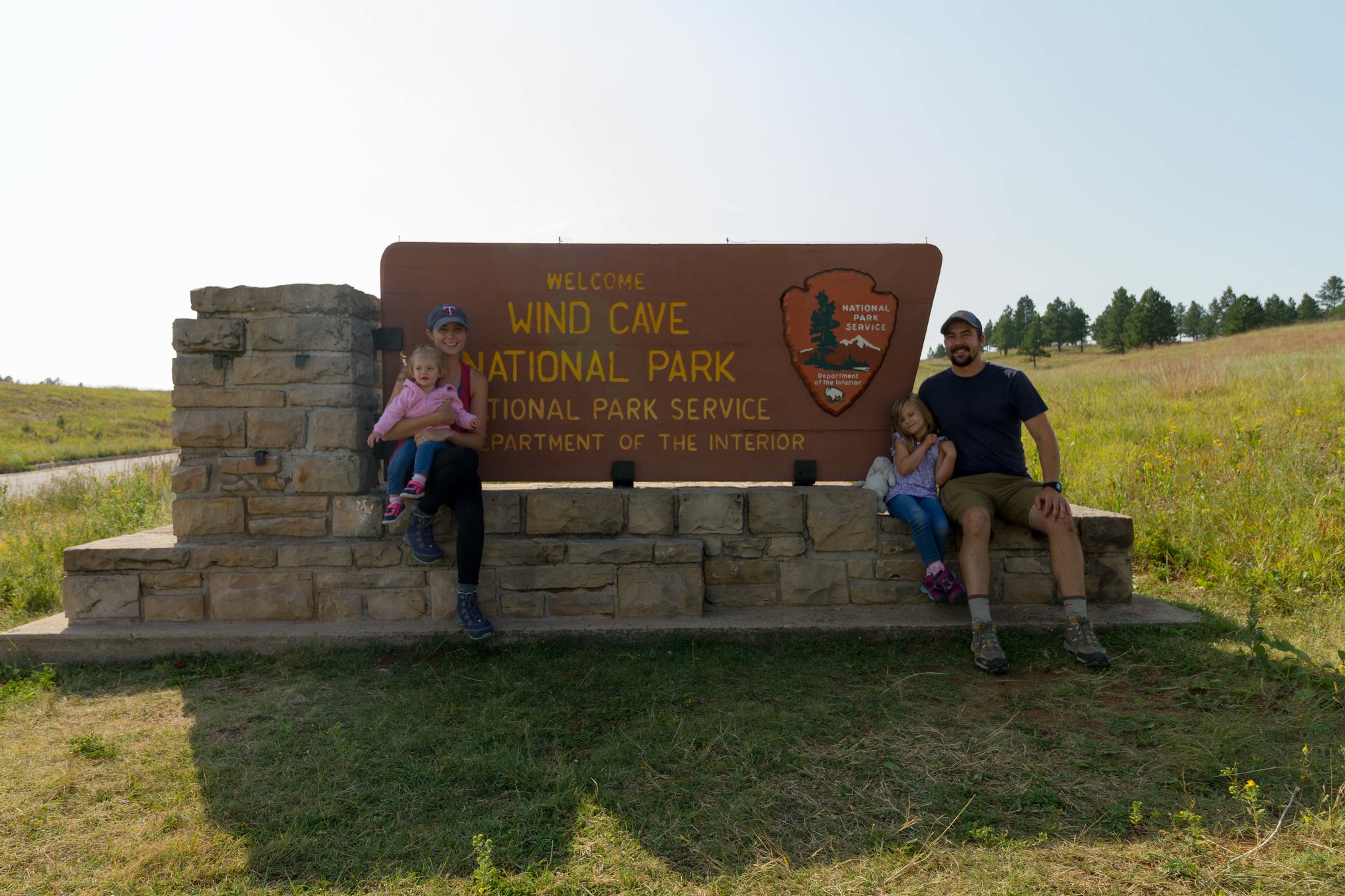 I was very impressed with Wind Cave National Park. It was fascinating to imagine being an early explorer of the cave with only a candle, some string and your wits to guide you down there. Yet, Alvin McDonald managed to explore miles and miles of that cave. The cave is certainly a natural wonder, but if you do visit the park don’t forget about the trails and wildlife on the surface as well!